Warren Buffett wants the wealthiest of Americans to pay more in taxes. In a New York Times op-ed (”Stop Coddling the Super-Rich“), the Oracle of Omaha advocates that the US tax code should remain as is for 99.7 percent of Americans,

I had lots of e-mail exchanges this morning, trying to figure out just how much money the Buffett increases would provide, but there’s a little problem: the Oracle doesn’t detail what the “super-rich” rates should be. We do know that according to the Congressional Budget Office and Joint Committee on Tax projections, allowing the Bush tax cuts for the wealthiest 2 percent of Americans expire as planned, would raise nearly $1 trillion over the next 10 years. My guess is that Buffett’s plan would probably aim to gather that same trillion, but would rely on millionaires and billionaires to pay the freight, sparing the folks who are in the $250,000 – $1 million range.

That said, it’s clear that that Buffett’s argument is more about general fairness in the tax code, rather than being a solution to cure the nation’s debt woes. According to IRS data from 2007, cited in an Economic Policy Institute report, the top 1 percent of taxpayers paid 40.4 percent of the total income taxes collected by the federal government and the bottom 95 percent paid 39.4 percent of the income tax burden. This is the definition of a progressive tax system: the wealthier pay a larger share than everyone else.

The math changes after factoring in payroll taxes, which are mostly paid by those with incomes below $100,000 per year. Buffett notes that he was taxed at 17.4 percent of his $46 million of taxable income last year, while his staff of 20 pays a far larger percentage: “their tax burdens ranged from 33 percent to 41 percent and averaged 36 percent.”

Buffett has been talking about this for a while, but the debt ceiling negotiations have given him another chance to point out a fact: tax rates for the rich have been declining for over two decades. As rates have dropped, the super-rich have done quite well — from 1980 to 2005, more than 80 percent of total increase in Americans’ income went to the top 1 percent of taxpayers. 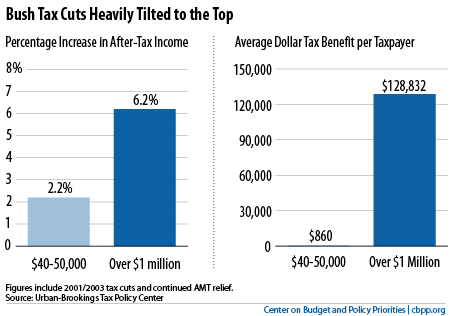 Taxing the rich will not solve our nation’s long-term debt woes — there’s just not enough of them to fill that $14 trillion hole. But Buffett’s main point, that the system has gotten out of whack, will likely resonate with 99 percent of Americans.