Facebook is launching a massive upgrade of its Friend Lists feature in an effort to make it more useful for users.

The feature, which debuted in 2007, is currently used by less than 5% of users, according to Facebook CEO Mark Zuckerberg. The revamp is designed to make Friend Lists easier to manage and and more popular.

The changes include Smart Lists, sharing content to lists, consuming content from lists and two new lists: “Close Friends” and “Acquaintances.” Facebook has been testing these features for the past few days and intends to roll it out to all users in the coming weeks.

The problem with current solutions for organizing friends (i.e. Google+ Circles) is that users simply don’t enjoy taking the time to organize their friends into groups, Facebook Product Manager Blake Ross told Mashable. So Facebook decided to find a way to automatically curate Friend Lists on behalf of the user.

The result is Smart Lists and suggestions. Smart Lists automatically creates lists for city, work, family and school. You can, for example, create a list of friends that live within 50 miles of your location. You can then use that list to find out what’s happening nearby or share local parties with local friends without bugging friends in another city.

Suggestions continues the process by suggesting friends that you may want to add to one of your lists. Facebook uses its algorithms to determine which friends may belong in a group.

Facebook is also introducing two other Friend Lists: Close Friends and Acquaintances. These lists are not Smart Lists — they do not automatically update themselves. However, they do have a few unique features. If you add a friend to Close Friends, for example, that friend’s posts will appear more prominently in your News Feed. On the other hand, adding a friend to the Acquaintances list will assure you don’t see that person’s posts unless it’s major news (i.e. an engagement).

With more Friend Lists and friends in those lists, Facebook is hoping you will use them more. To that end, Facebook is introducing easier access to Friend Lists all throughout Facebook. They are now integrated into News Feed, making it possible to check what your close friends or your work buddies are posting. They are now more prominent in the Facebook Publisher, making it easier to share a status update with just a small group of friends. And finally, you can add friends to Friend Lists right from a friend’s profile page.

While these changes feel like an answer to the rise of Google+, the search giant’s social network, Ross says that’s not the case. “We’ve been iterating on this in the last four years,” he said. He thinks that nobody has done friend grouping right. He believes that Smart Lists and automatic friend grouping is a step toward taking away the pain of organizing friends. 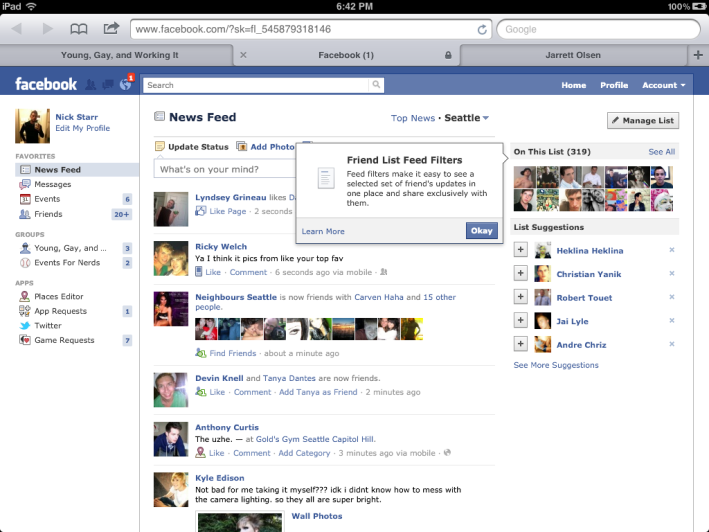