1. Unemployment is at the highest level since the Great Depression

2. At the same time, corporate profits are at an all-time high, both in absolute dollars and as a share of the economy. 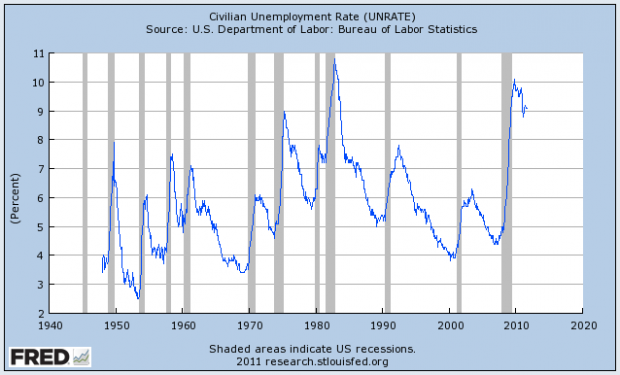 The charts explain what the Wall Street protesters are angry about. They also explain why the protesters’ message is resonating with the country at large.

3. Wages as a percent of the economy are at an all-time low. In other words, corporate profits are at an all-time high, in part, because corporations are paying less of their revenue to employees than they ever have. There are lots of reasons for this, many of which are not the fault of the corporations. (It’s a global economy now, and 2-3 billion new low-cost employees in China, India, et al, have recently entered the global workforce. This is putting pressure on wages the world over.)

4. Income and wealth inequality in the US economy is near an all-time high: The owners of the country’s assets (capital) are winning, everyone else (labor) is losing.

The top earners are capturing a higher share of the national income than they have anytime since the 1920s:

CEO pay and corporate profits have skyrocketed in the past 20 years, “production worker” pay has risen 4%.

After adjusting for inflation, average earnings haven’t increased in 50 years.

It’s worth noting that the US has been in a similar situation before: At the end of the “Roaring ’20s,” just before the start of the Great Depression. (See some of the charts above).

It took the country 15-20 years to pull out of that slump and fix the imbalances. But by the mid-1950s, employment, corporate profits, wages, and inequality had all returned to more normal levels. And the country enjoyed a couple of decades of relatively well-balanced prosperity. But now, everything’s out of whack again.

Importantly, the inequality that has developed in the economy over the past couple of decades is not just a moral issue. It’s a practical one. It is, as sociologists might say, “de-stabilizing.” It leads directly to the sort of social unrest that we’re seeing right now.