Presenting: 10 of the Smartest Big Brands in Social Media

Samir Balwani is an emerging technology strategist at Morpheus Media, a firm specializing in Social Marketing, SEM, and SEO. You can follow him on Twitter @samirbalwani and get his newsletter.

As we battle a global recession, corporations are looking for new ways to sell their products and engage their consumers. Many have turned to the Internet, with Social Media in particular, to market their goods. Let’s take a look at 10 companies that have done a phenomenal job of taking advantage of social media platforms.

? Created by George Write, the marketing director of Blendtec, the campaign was low cost and instantly became a hit. In the video, Tom Dickson the CEO of Blendtec, attempts to blend objects in their blender. This simple idea led to a “five-fold increase in sales”.

Blendtec leveraged YouTube’s subscriber base and tried something fun and original. The campaign was a success and continues to entertain and sell.

Lesson: Social media marketing doesn’t always need to cost a lot of money. Creating funny, original video and leveraging an already large user base can be used to increase sales.

Recently, Burger King has really been pushing the envelope with their marketing. They first started with whoppervirgins.com, then entered the social space with the “sacrifice ten friends” facebook application. The campaign quickly went viral and was adopted by over 20,000 users, sacrificing 200,000 friends for free whoppers.

Sadly, the application was shut down as quickly as it started by Facebook, citing privacy concerns. Regardless, the application was beautifully built and the idea was perfect. Burger King built in the ability to share it, the incentive to use it, and added just enough humor to make the campaign a hit.

Lesson: Successful and viral campaigns don’t just test out social media, they jump in it. Pushing the envelope can create the buzz that makes your campaign memorable.

3. Starbucks Asks for Your Advice

Social media isn’t only about using existing websites, but sometimes creating your own. To get a better handle on consumer feedback, Starbucks did just that with “My Starbucks Idea.”

The site allows users to submit suggestions to be voted on by Starbucks consumers, and the most popular suggestions are highlighted and reviewed. Starbucks then took it a step further and added an “Ideas in Action” blog that gives updates to users on the status of changes suggested. 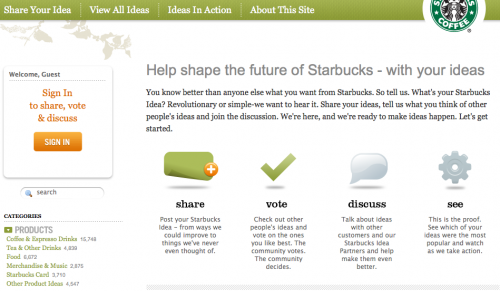 By empowering their exceptionally web savvy consumer, Starbucks strengthens their campaign to add a personal touch to coffee.

Lesson: Thinking of ways to build your company are great, but directly asking your consumers what they want, is better. Acting on that information and doing it publicly is key to the success of this campaign.

Starbucks has also embraced Twitter, you can see their stream at @Starbucks.

4. Sun Microsystems and the CEO Blog

Want your blog to really make a splash? You could learn a lot from Sun Microsystem’s CEO blog. Jonathan Schwartz’s blog received about 400,000 hits a month (in 2006).

It’s not the number of hits that make his blog a social media success, but the openness on it. Positive and negative comments are allowed, and even the most inane are approved. Transparency from the highest position in a company trickles down and increases trust from consumers.

Lesson: Social media is a culture of transparency and honesty that must be embraced, leading by example is one of the best ways to introduce it to a company. Few things are better than a CEO that blogs or uses twitter.

Sun Microsystems also has a network of blogs, friends on FacebookFacebook reviews

5. IBM With Lots of Blogs

When IBM decided they wanted to start using blogs, they didn’t just create one blog, they created an entire network. IBM created a way and allowed their employees to write about their experiences, what they’re working on, or any other topic of choice.

IBM capitalizes on the intelligence of their employees to give consumers insight into what happens behind the scenes. By giving the industry experts they’ve hired a voice, IBM is able to highlight the people behind their products. Users get to see how IBM operates, and are given a direct connection with IBM employees.

You can also find IBM on Twitter giving updates on events from their calendar.

Obviously we had to talk about Twitter, this is a social media post after all. The most obvious of companies to make Twitter work is Zappos, an online retailer that has really led the way in corporate Twitter use.

The idea of micro-blogging and the sense of exceptional customer service is ingrained in the corporate culture. Most Zappos employees have an active account, and the Zappos site has a page that aggregates all the streams.

The reason why Zappos stands out on Twitter is because of their ability to bring the company to life. The Zappos CEO has lent his personality to the company brand, a personality that is friendly, helpful, funny, and trustworthy. They use Twitter to highlight interesting facts, and to talk to their consumers. Talking to Zappos is like talking to a friend that happens to sell shoes.

Lesson: Take a CEO that twitters, add in a great personality and you have a recipe for social success. Ingraining social media into the culture of a corporation means that every consumer interaction is personal.

Zappos also does a great job of using their blog and Facebook to engage their avid fanbase.

I never expected to be writing good things about Comcast, but because of Frank Eliason things have changed. Frank is the man behind @comcastcares, a Twitter account setup to help Comcast users in need.

Comcast has found a way to offer exceptional customer service to their consumers, but the thing that really makes them stand out is how well they monitor discontent. Complain about Comcast and you can bet you’ll hear from @comcastcares to see if they can help.

Lesson: Being active on Twitter is great but tracking and seeing who’s mentioning you, is the next step. Social media allows for the possibility of great customer service, and with it, better brand loyalty.

You’d think I’d talk about how Ford uses Twitter (they use it well), but the thing that makes them really shine is how they did a great job quelling a would-be public relations disaster online with the use of social media.

The basic story is that there was an internal gaffe where Ford’s legal department sent out cease and desist letters to forum owners using Ford trademarks. Obviously the story was twisted and changed, and in the end people were outraged.

What makes this a success story for social media is that Scott Monty (Ford’s community manager) was quick to find out what happened and let us know the true story. Not only that, but as things were being fixed and a compromise was ironed out, the public was informed every step of the way.

Although we don’t know if social media has shown a direct return on investment for Ford, the public relations fiasco it helped avert (think Motrin) should help make the case for more funding for social media.

Lesson: Social media can be used to inform consumers in real-time of how a corporation is reacting to events that affect the customer. Transparency in the process and access to constant information can help stop a negative story from going viral.

Social media is about sharing all types of content, including photos. Facilitating the sharing is easy, but gaining something from it requires a sound strategy. Graco did just that, by building a community around their product using FlickrFlickr reviews

Flickr isn’t the center of their campaign, but they promote it heavily with the Graco blog which also creates an incentive for others to submit pictures. The photographs help highlight the people behind Graco and the consumers using their products.

Graco takes their strategy one step further by introducing offline marketing in the form of community gatherings. The pictures from these meet-ups are posted to the Flickr page, further humanizing the community around the product.

Lesson: Social media doesn’t have to exist wholly online. Blending offline marketing with online efforts can build a community around a brand.

Graco has a blog and leverages Lindsay Lebresco (the corporate blogger for Graco) to be active on Twitter.

Embracing social media is a huge undertaking, and involves a large investment. Dell didn’t shy away from these obstacles, instead they’ve gone above and beyond, truly cultivating a cross-platform community. They’ve created multiple Twitter handles, a network of blogs, and are very active on Facebook.

Dell is also one of the few companies to publicly state that they created a return on investment from Twitter. Apparently, Dell’s social media efforts help create “$1 million in revenue“.

Lesson: Social media isn’t all about ROI, but it is possible. Creating cross-platform strategies can lead to the most success, especially when your demographic is already Internet and technologically savvy.

We’ve explored 10 companies and picked out 10 lessons we can learn from them. As social media evolves, we’ll see how many of these are replaced by new innovations in marketing. Is there a company you think evolved the industry, that deserves to be on this list?